Coronavirus, the slow passing of time in fear and solitude 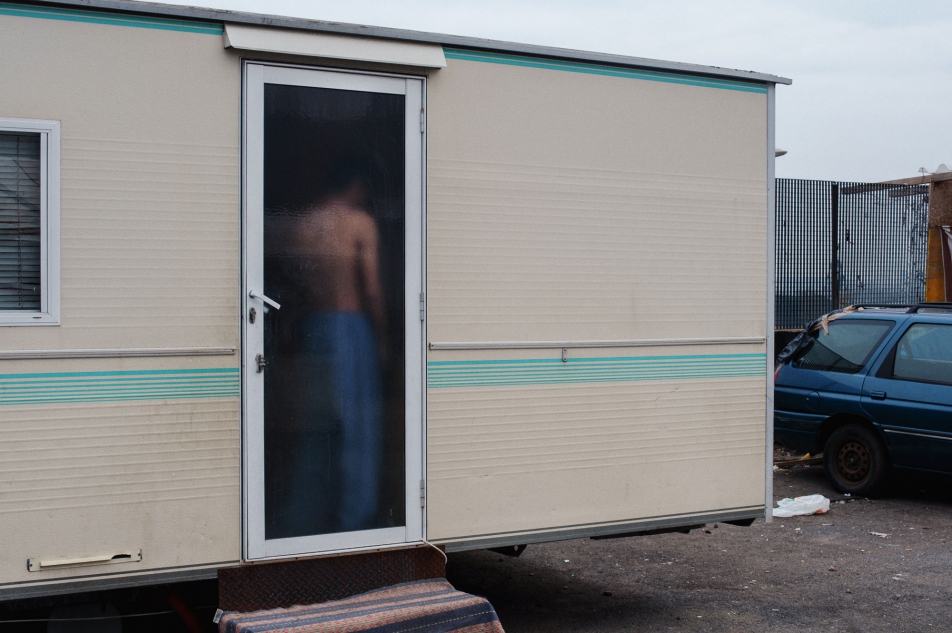 Can the solitude of Covid-19 be told through a photograph? I'd say so, judging from the photos taken by the Parallelozero photojournalists for CoviDiaries. What must it have been like to spend three months enclosed within the Castel Romano shanty town, having to live in the poky confines of a prefab? Only the young Bosnian we see from behind could know for sure, his figure blurred, wearing just pyjama bottoms or the bottom half of a pair of overalls through the glass pane that separates him from the rest of the world. But this image of a faceless youngster turning his back on the outside world is able to encapsulate the slow passing of time, of seconds, of minutes and of hours that echo inside that head we can barely make out.

The patient lying on a bed in the A&E department waiting room at Bergamo's Giovanni XXIII Hospital, which was converted into a Covid ward during those initial dramatic days of the pandemic, barely clinging onto the bed rails, to the oxygen tank, to life. Occupied by a body isolated from loved ones, with no chance of a loving caress or a word of comfort from their nearest and dearest, not knowing if they'll ever see them again. A nurse from Polla Hospital, in the province of Salerno, strokes his dog while waiting to say a socially distant hello to his wife during a break from work: we can see the tiredness in his face, the testimony of having seen so much solitary suffering among the patients he has tended to. And what can we say about the hands that can only offer a virtual caress, projected onto a wall to become life-sized during a video call from the sofa at home?

Reaching towards the other person when they're not there, while what they would like more than anything is to be able to touch for real, to hug, to smell the scent of the skin, the breath of those we love, of those whose absence is most excruciating. Positano bay is also alone, photographed from above it's as if not just the boats, but also the humans, have vanished forever, simply evaporated, almost as if nobody has ever inhabited this planet, a fleeting moment lost from the millions of years since the galaxy began. And then another gaze lost in the emptiness, in the wistfulness and in the boredom of a boy lying amongst his toys on the bedroom floor of a house in the province of Latina, a watch on the wrist that's too big for him, too big just as this solitude must seem for someone so young, for whom classmates are so important, as are the friends that until yesterday he was running around and playing football with.

Another boy or girl is about to see the light of this new world, a world in which their mother who's about to give birth must enter the delivery room alone at Buzzi Hospital in Milan: how crushing must the shiny steel of that lift seem, how alone must she feel under those neon lights, with no hope of being able to share this much-awaited moment with the one she loves. More lights envelop the figure of the Municipal Police Chief in Giffoni Valle Piana, in the province of Salerno, who has been in self-isolation since the beginning of the emergency: the bitter furrow of a mouth that's unable to smile encapsulates the experience of a man who knows he's enduring an unpleasant period, to put it mildly, while the eyes cannot see beyond the walls of a house that's become a prison. And a prison is exactly how the sterility of the departure lounge at Linate Airport seems, closing in around the body of the only passenger engrossed in the pixels of his computer: who knows who he's thinking about as his eyes stare into that screen, the one instrument left for maintaining contact with the rest of the world.

Only Giorgia and Marco, a fashion copywriter and a web designer, give the impression of being lucky to experience the lockdown's suspension of time in a different way: thanks to which it seems they're sharing more than just a bed. Because for just a few very lucky cases, isolation didn't just mean loneliness.

(In the photo: a young man of Bosnian origin in his living module inside the shanty town at Castel Romano, on the coast near Rome.)