Coronavirus, the thousand signs of an illness that leaves no sign 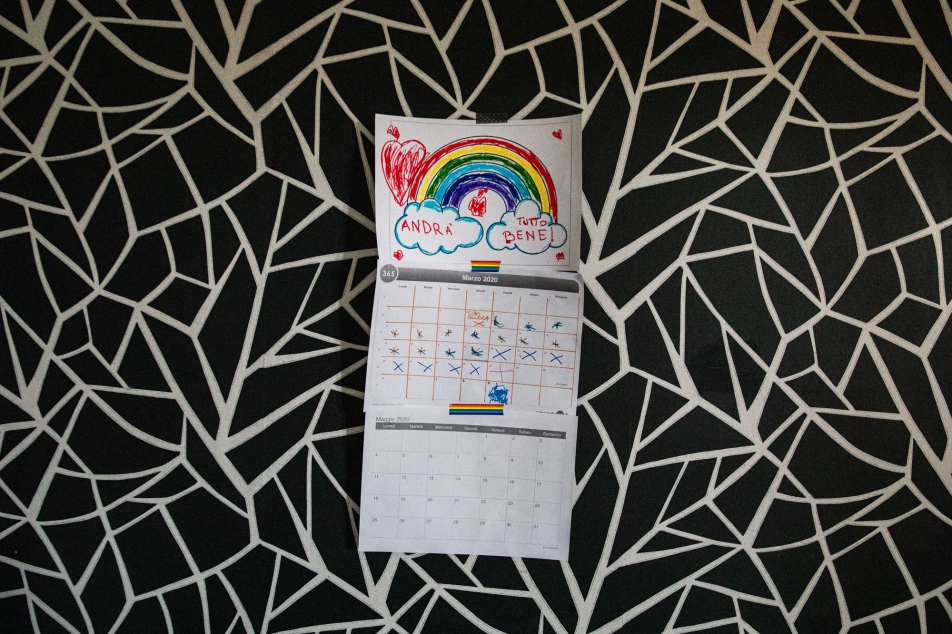 Like the mark left on the face of a person wearing a mask. Before the Coronavirus epidemic, masks were only seen in the West – and with amused scepticism – on the noses and mouths of tourists and citizens from the Far East, but they have since become a sign of these extraordinary times. They come in a thousand different shapes and colours, with typical Italian creativity. They became the subject of future business opportunities, with startups being established, and a gesture of responsibility from large fashion houses that converted their production to help others: not to live better, but to live.

The mask became a symbol of ingenuity, of outside-the-box thinking, and even of desperation, as did the snorkelling mask. By adding a 3D-printed valve it was transformed into a vital piece of equipment to provide oxygen to patients who were unable to breathe, while hospitals were short of spare parts for medical ventilators costing thousands of euros. Then, who knows, perhaps during this unprecedented summer it could return to being just a simple mask for those trying out diving for the first time.

Medical coats, visors and gloves were no longer confined to operating theatres. Instead, they became a part of everyday life, symbols of a new normality, whatever that might be. Living with the virus means looking for the sanitising gel dispenser outside shop entrances, suspiciously glancing at those who come a little too close, flinching at the sound of a nearby sneeze. Amuchina gel, alcohol cleaner, and other disinfectants vanished from supermarkets and chemist's during the early days of lockdown, and then reappeared: mountains of bottles full of pink alcohol cleaner, like in the photo of the Antica Distilleria Russo distillery from Mercato San Severino, which tripled its production to try to meet the increased demand.

The Coronavirus doesn't reveal itself with signs, it doesn't deface the body like a plague; it just leaves lungs full of shadows and holes which the eyes cannot see. But everyone saw the images of caskets lined up in hospital mortuaries, images they'll never be able to forget. Nor will they forget the funereal night march of lorries lining the streets of Bergamo loaded with coffins.

Signs: of peace, which in churches can no longer be exchanged. Of affection, love and friendship, reduced, where possible, to a touch between elbows and an awkward smile. Or a phone call, which became a video call whenever possible: so as not to forget the faces of a parent, a girlfriend or boyfriend, or a friend. Or even a newborn child.

The video camera, microphone and screen were also signs of that time: recreating a classroom to study with the teacher, a gym for practising yoga with the instructor, a bar to share a drink, always near but far.

New layouts were composed in the silent emptiness: beach umbrellas, further apart than usual on the still deserted beaches of Veneto at the beginning of June, or the chairs arranged for conferences, meetings and concerts - the very few that are held, almost as a challenge. And then there's the restaurant tables, and the meandering supermarket queues.

Finally the rainbow. We don't know whose idea it was initially, but it became the logo for those terrible months. It was drawn on schools and houses, on balcony banners, or chalked onto the road. Not so much a sign, more a symbol: indeed, it doesn't cut, wound, or separate: if anything, it brings colours and people together. With a childish promise, which everyone was desperate to believe: andrà tutto bene (everything will be all right).

(In the photograph: the calendar that Niccolò decided to use, while confined to his house by the lockdown in the province of Latina with his parents, to keep count of the days.)